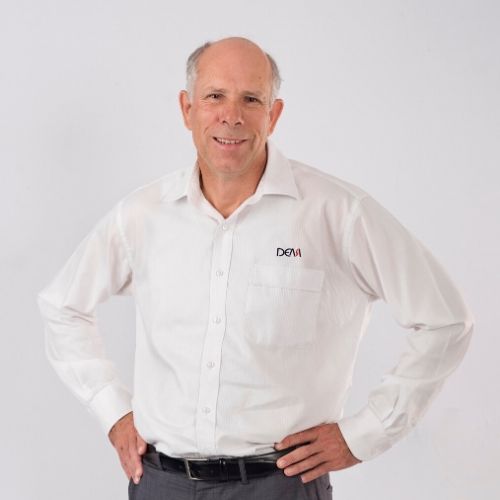 Tom is the dedicated Managing Director of DEM Fire. He oversees all the business operations, working closely with his brother and General Manager, Gary, when it comes to leading the team and strategy.

“DEM started as DE Maintenance, back in 1977. It was a pump maintenance company, basically a one-man operation that dealt with diesel and electrical maintenance – so pumps, generators and that sort of equipment.”

From trainee to MD

“I’ve been in the fire industry since leaving school and was originally employed as a trainee fire protection engineer. “

“At the time, there was no dedicated uni courses for it, but I did a six-year traineeship. I did electrical trade during the day and mechanical engineering at night.”

Tom then went on to operate and manage different departments and businesses within the corporate space before becoming redundant. It was then that he decided to do it for himself.

In 2000, Tom launched a business called Alliance Fire. The name came from the idea of “building a close alliance with customers.” Alliance Fire subcontracted to DE Maintenance and Tom had founded a good relationship with Ian his then team of five.

Not long after, the opportunity came to merge the two businesses. “It was a great partnership. It gave me the chance to springboard off DE as an established business and give clients the confidence to work with us. So, we moved from pump maintenance to full fire protection.”

It was then that Gary and Janice, Tom’s wife, joined the team. With Tom and Gary doing everything in front and Janice doing all things admin in the backroom, DE Maintenance then transformed into DEM Fire. Tom wanted to rebrand the business to focus on fire, while still giving a nod to the company’s history.

“Back then, it was six people at DE Maintenance. Now we have DEM Fire with 100 staff. It’s been a fantastic ride.”

When describing DEM Fire as a company, Tom says it simply:

“We pride ourselves in providing a high level of service, working with customers and trying to understand our customers. We really value those relationships.”

Tom wanted to make a change in the world of fire protection. That was his focus then and it continues to be his focus now. “In the fire game, there was, and still often is, a pretty poor level of service and commitment. Our customers are people who care. The larger corporates, people who are interested in getting a good job done. People interested in their buildings being compliant – not just those looking at fire protection as a necessary evil they have to pay for.”

And that’s where DEM’s slogan comes from – FIRE PROTECTION BY PEOPLE THAT CARE FOR PEOPLE THAT CARE. Tom actually came up with the fitting slogan while driving on his way to work, many years ago. It rang true then and it rings true now.

“DEM’s goal is to marry up with those sorts of people. We have a first class and first-tier customer list, from Mirvac and Stocklands to Sydney Olympic Park and Goodman.”

DEM Fire predominantly services the Greater Sydney area, as well as having a few sites in Western Australia and Queensland.

So, why does Tom do what he does?

“Because I just love it. I feel a huge sense of obligation to the customers and employees who have made the business over the years. I’m in a position now that I completely rely on the team to deliver, but I’m always in the background. It all comes down to continuing the legacy of uncompromising fire service and solutions.”

Tom trusts that his brother, Gary, is fully committed and engaged in the business. “We have a reliable team with a great vision for the future.”

When Tom isn’t focused on fire, he has a library of hobbies to choose from. “My latest hobby is sailing. That’s my new frontier – increasing the boundaries of knowledge there. I started with a small, river racing boat and now have a yacht – an ocean cruiser.” In addition to sailing, adventure calls Tom’s name. He enjoys cross-country skiing, as well as plenty of jazz.

More needs to be done to positively impact change and stimulate growth in the fire prevention industry.

Typically, every commercial property must have an Emergency Planning Committee (EPC) as defined in the Australian standard for occupational health and safety, AS 3745-2010. The EPC is responsible for developing and managing your property’s fire evacuation plan, which has three key components: evacuation diagrams, emergency response plans and emergency training.

Fire compliance and certification are central to safe and effective fire prevention solutions, from the design phase through to ongoing asset management. At DEM Fire, we deliver holistic fire protection services from an expert team of fire safety professionals. These are our recommended steps to ensure you have a fully accredited and effective fire protection system design.